Emotional And Cognitive Sequelae of MTBI

Emotional And Cognitive Sequelae of MTBI

Mild traumatic brain injury, or MTBI, is a controversial issue in the field of injury. There have been reports of cognitive and emotional problems in these patients, including reduced processing speeds, memory, concentration, attention deficits, depression, and anxiety. The problem? Are these symptoms a matter of brain injury or psychological distress arising from the injury?

The authors of this current study1 compared and evaluated the emotional functioning and cognitive abilities in 27 MTBI patients and 27 controls.

The only emotional/personality scores to differ from controls, was depression. And, there was a direct relationship between depression and the level of psychological distress in the MTBI patient. The authors suggest this may point to MTBI having a psychological, rather than organic basis. So, the authors evaluated patients' pre-injury depression levels (via self-report), and found:

"Although there was evidence to suggest that the self-reports of premorbid depressive symptoms in the MTBI group were higher than the controls, both self- and observer-ratings confirmed that there was a significant increase in the level of depression experienced by the MTBI group after injury."

MTBI patients had minimal cognitive problems. Verbal fluency proved to be the most problematic for this sample, with selective and sustained attention intact. Also, the authors did not find a concrete relationship between post injury personality and cognitive functioning.
After collecting all of the data, the authors conclude that MTBI cannot be categorized as simply organic or simply psychological, but that the two are inextricably linked:

"In conclusion, there is some evidence to suggest that in the first few months after sustaining a MTBI patients experience limited cognitive problems, affecting only their verbal fluency, together with an increase in emotional problems...Moreover, there appears to be a relationship between the level of accident-related psychological distress experienced by patients who have suffered a MTBI and these emotional symptoms, suggesting that with mild injuries these sequelae may have a reactive rather than an organic basis." 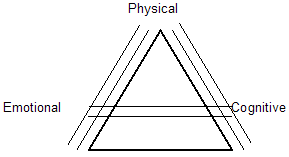 In short, the phenomenon of MTBI is a complex interaction between physical injury, emotional issues, and cognitive problems. This interaction was clearly described by Dr. Stephen P. Schmitz2 at the recent North American Whiplash Trauma Congress. He illustrated the dynamics of MTBI as shown to the right.

The bottom line? "Effective treatment for post-concussion syndrome involves intervention in all three areas at the same time. By doing so, the cycle is broken and you begin to feel better faster."2